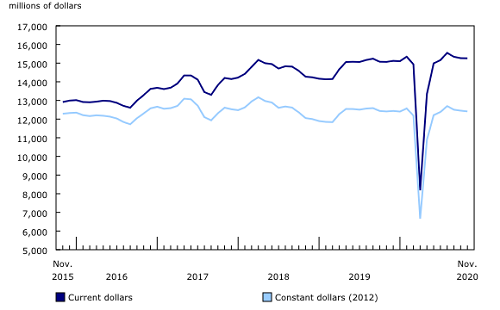 Investment in Canadian building construction declines 0.1% to $15.3 billion in November

Statistics Canada reports that total investment in building construction declined for a third consecutive month, edging down 0.1% to $15.3 billion in November. Slight decreases in both residential and non-residential construction led to minimal change overall. Gains in Ontario and Nova Scotia were offset in large part by declines in six provinces.

Non-residential investment was mostly unchanged in November, remaining at $4.4 billion. Slight declines in six provinces were offset by small gains in Ontario (+0.4% to $1.8 billion) and British Columbia (+1.0% to $665 million).

Investment in industrial building construction increased 0.6% in November, with the majority of the growth in Ontario (+1.7% to $339 million) and Quebec (+1.5% to $215 million). The increases reported in Ontario were attributable primarily to the construction of the $100 million Metrolinx Keelesdale transit station in the city of Toronto.

Institutional building investment advanced 0.4%—the first increase in this component following four months of declines. The majority of the growth was reported in Alberta (+2.6%) and British Columbia (+1.5%), stemming from new construction of educational buildings in both provinces and welfare homes in British Columbia.

Investment in residential construction edged down 0.1% in November, declining for the first time in six months. Lower investment in multi-unit dwellings more than offset the growth reported for single-unit investment. Provincially, Manitoba reported the largest decline (-7.8% to $402 million), followed by Quebec (-1.1% to $2.3 billion). Meanwhile, Nova Scotia reached its second-highest value on record, up 15.2% to $271 million.

Despite the exceptional COVID-19-related decline in April 2020, year-over-year investment in single-unit buildings increased 9.4%. In November, single-unit investment was up 2.1% to $5.6 billion. The construction of new single family homes in Toronto led to an increase of 2.1% in Ontario—the largest increase of all the provinces.

Multi-unit construction investment declined for the second consecutive month in November, down 2.2% to $5.2 billion, and offsetting the growth observed in single-unit investment. Manitoba, Quebec, and Alberta reported the largest drops of the five provinces reporting declines in this component.