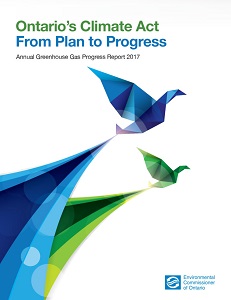 “A price on carbon pollution is a crucial tool we need to slow climate change,” said Commissioner Saxe.

Carbon prices raised $1.9 billion in 2017 to support reductions of greenhouse gas emissions. The report, Ontario’s Climate Act: From Plan to Progress, notes that of the $1.37 billion in projects funded as of November 2017, almost all meets the requirements of the Climate Change Mitigation and Low-carbon Economy Act.

As well, Ontario’s carbon market has been linked with the carbon markets of Quebec and California, creating a combined market of 61 million people. “This should keep costs down for Ontario families, and provide more flexibility and opportunities for business,” said the Commissioner.

While Ontario has a lot to be proud of, there is room to improve. The report notes that the government needs a better plan for spending cap and trade funds and a number of proposed policies may not lower emissions. Some government ministries must take climate change more seriously by considering it in their decision making, spending and regulations.

Saxe is also concerned about the government’s long-term plans for reducing emissions. While Ontario’s emissions are the lowest since 1990, when reporting began, there will be challenges in meeting future targets. “There are no more silver bullets,” said Saxe.

Transportation represents a third of Ontario emissions. Specifically, greenhouse gas emissions from freight transport have more than doubled since 1990. Without urgent action, fossil fuel emissions from trucking alone will make it impossible to meet the province’s climate targets.

“Reducing greenhouse gas emissions and putting a price on carbon pollution are a good start,” said Saxe. “But this is a complicated process; there is a lot more to do.”

Ontario’s Climate Act: From Plan to Progress can be downloaded at eco.on.ca.