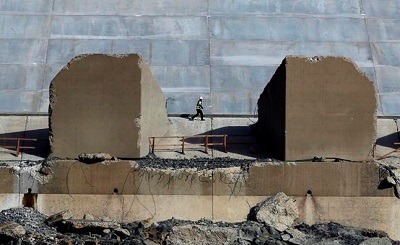 “Long-term and systemic failures” by California dam managers and regulators to recognize inherent construction and design flaws at the tallest U.S. dam caused last year’s near-disaster there, an independent panel of dam safety experts said Friday, calling it a wake-up call for dam operators around the country.

Members of the Association of State Dam Safety Officials and the U.S. Society on Dams carried out an independent investigation into the human and technical problems that caused the crisis at California’s Oroville Dam. The experts issued their report Friday.

Both spillways at the half-century-old Oroville Dam gave way in February 2017, forcing 200,000 people downstream to be evacuated. The feared uncontrolled release of massive amounts of water over the top did not happen, and residents were allowed to return home days later.

The independent panel of safety experts said the dam was badly built from the start in the 1960s. The principal designer of the spillway told the dam-safety team that he had just completed post-graduate work at the time he worked on the Oroville project decades ago, had had no previous engineering employment beyond two summer stints, and had never designed a spillway before.

The crisis started when massive chunks of the dam’s main concrete spillway suddenly began washing away.

The report faulted California’s Department of Water Resources, which owns and operates the dam, an anchor of California’s water system, and dam regulators for allegedly failing to recognize and address problems in the 770-foot (230 metre) structure over decades of inspections and reviews.