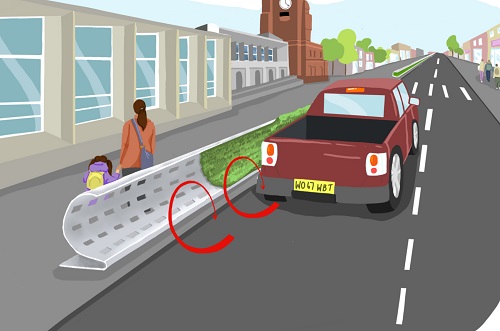 The health concerns arising from lower air quality are more significant amongst lower income communities which are more likely to be situated near heavily traffic-laden thoroughfares. Similarly, children are both more vulnerable to and more readily exposed to air pollution simply due to their proximity to the ground, where heavier pollutants settle over time. Real-time data on air pollution in London and south east England can be found on London Air, a tool run by the London Air Quality Network at Imperial.

Dr Tilly Collins, from Imperial’s Centre for Environmental Policy, found this issue particularly worrying, especially after noticing the severe pollution in the air while watching her child playing netball in a school playground alongside a busy London A-road.

“I thought to myself, what could be done? And done now? So, I started researching the effect of walls along roads,” Dr Collins said. “It became evident that along the pedestrian side of these roadside walls, there are vortices where the air quality can actually be even worse as the pollutants get trapped in them.”