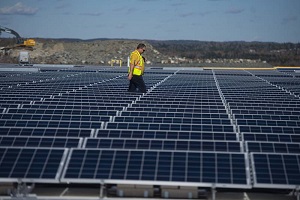 The wind is so steady at the Ikea store in Dartmouth, it seems like a natural place to look at erecting wind turbines.

And, in fact, a weather station on the roof of the store is collecting data for research on just such a project.  But that’s at least three years in the future, and facilities manager Jason Lehman is already plenty busy up there, overseeing the largest solar installation in the province.

The goal during construction was to build the most sustainable Ikea store in Canada, and a couple of months ago it became the first to get LEED Gold certification. About half the Ikeas in the country have a solar installation on their roof, and Dartmouth’s consists of 2,501 panels.

“On days like this (Thursday’s brilliant sunshine), we’ll run 95 per cent of the store off the electricity we’re generating.  The five per cent is only because of regulations that we have to take power from Nova Scotia Power,” Lehman said. “Everything I generate I have to use.  If I can’t use it, I have to basically turn the dial back so we don’t generate that much.”

The Ikea installation, rated at 850 kilowatts DC, has been operational since February of 2018, but does not feed excess power to the grid. It has generated over five megawatts of energy in one day and, if not for the regulatory cap, could generate 12-15 per cent more electricity than the building uses.

“You can put in any system up to 99 kilowatts with no issues, you can feed back into the grid almost unlimited.  But the moment you get a hundred kilowatts or more, then Nova Scotia Power has to approve your design and your control scheme. Because of how solar rolls out and how it affects a grid, a system this size automatically caused a lot of concern and hesitation,” said Lehman.

“Solar, as an energy generating technology, as it scales up, is becoming more and more open.  There’s a lot of different technologies, a lot of research going on on how to create more efficient setups, more efficient installations. Ours is set up the way it is because of a number of different requirements, one of which is to limit the amount of wind we have up here and to manage risk that way.  All of our panels are installed in such a way that we should be able to survive a Category 3 hurricane without losing them.”

Lehman said one of Ikea’s goals is to show what large companies can do to affect change.  The Dartmouth store has four locally designed and built solar lamp posts in the parking lot, each with a small wind turbine on top.  However, those four cost as much as 30 conventional lamp posts.