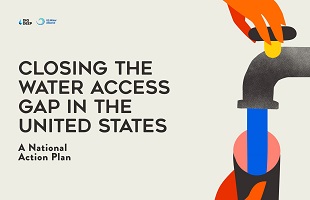 Ontario, Calif. (Nov. 18, 2019) — A new report, produced by DigDeep and the US Water Alliance with advisory assistance from IAPMO, titled “Closing the Water Access Gap in the United States: A National Action Plan,” reveals that more than 2 million Americans today live with no running water, indoor plumbing or sanitation service, and recommends a series of remedies.

On the Navajo Nation in the Southwest, families drive for hours to haul barrels of water to meet their basic needs. In West Virginia, they drink from polluted streams. In Alabama, parents warn their children not to play outside because their yards are flooded with sewage. Families living in Texas border towns worry because there is no running water to fight fires.

“Closing the Water Access Gap in the United States” is the most comprehensive national study on the more than 2 million Americans who lack access to water service. The report fills an important knowledge gap: there is no one entity — whether a federal agency or research institution — that collects comprehensive data on the scope of the United States water access problem.

“This report shows us all that lack access to water and sanitation is not simply an issue faced is lesser-developed countries — it is happening in our backyard,” said George McGraw, DigDeep CEO. “With IAPMO’s work for nearly a century in water and sanitation safety, their involvement in this report was important — not only now, but also moving forward in helping address the issues outlined in the study.”

The report’s authors, with researchers from Michigan State University, examine six areas where the water access gap is particularly acute: the Central Valley of California, border colonias in Texas, rural counties in Mississippi and Alabama, rural West Virginia, the “four corners” area in the Southwest, and Puerto Rico. Researchers spoke to families living without water and captured their stories of poor health and economic hardship. The authors also spoke to local community leaders working to solve the water crisis by distributing water, building community-centered water projects where no infrastructure exists, and advocating for policy change to bring more reliable services to rural and unincorporated communities. Despite these community efforts, data suggests that some communities may be backsliding; six states and Puerto Rico saw recent increases in their populations without water access.

“DigDeep and the US Water Alliance have done an incredible job in undertaking the daunting task, and worked tirelessly, to highlight the tragic circumstances faced by communities across America,” said Dave Viola, IAPMO’s Chief Operating Officer and member of the National Advisory Council for the report.

The report makes several recommendations to help close the water gap in the United States. Recommendations include re-introducing Census questions about whether homes have working taps and toilets, as well as changes to how the federal government funds and regulates water systems to support rural and unincorporated areas. There are also several recommendations for the philanthropic and global WASH (water, sanitation, and hygiene) sectors to drive community empowerment, deploy innovative technologies, and apply successful WASH models from abroad here in the United States. Read the full report at closethewatergap.org.

“It has been an honor to be part of such a comprehensive and impactful report,” said Dain Hansen, Senior Vice President, Government Affairs, IAPMO, and member of the National Advisory Council for the report. “IAPMO’s long-standing mission is to protect the public health and safety, and we stand committed to working within our industry in helping to address the water and sanitation access issues throughout the United States.”

ABOUT THE US WATER ALLIANCE

The US Water Alliance advances policies and programs to secure a sustainable water future for all. Established in 2008, the Alliance is a nationally recognized nonprofit organization that educates the nation on the true value of water, accelerates the adoption of one water policies and programs, and celebrates innovation in water management. The Alliance brings together diverse interests to identify and advance common-ground, achievable solutions to our nation’s most pressing water challenges. Our membership includes water providers, public officials, business leaders, environmental organizations, community leaders, policy organizations, and more.

DigDeep is a human rights nonprofit working to ensure that every American has access to clean, running water. Since its founding in 2012, DigDeep has brought water and sanitation systems to thousands of individuals across the states. DigDeep is the winner of the 2018 US Water Prize for its Navajo Water Project, which has brought water to hundreds (and counting) of indigenous families across New Mexico, Arizona, and Utah.

Sponsor of the Uniform Codes, IAPMO® – The International Association of Plumbing and Mechanical Officials – works in concert with government and industry for safe, sanitary plumbing and mechanical systems. Learn more about IAPMO at www.iapmo.org.