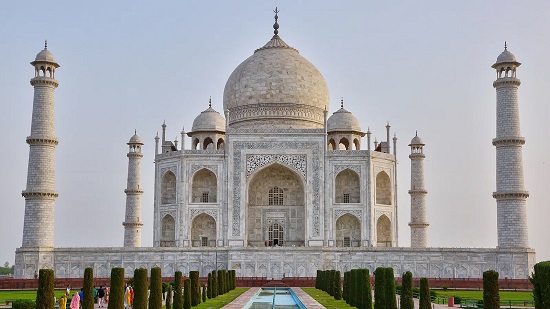 The architectural reference to the Taj Mahal is immediately discernible as you enter the Microsoft office in Noida, northern India.

Bathed in ivory white and punctuated with beautiful arches and “jaali“ – perforated lattice screens – the office is both a visual ode to the grandeur of the Taj Mahal and a state-of-the-art workplace.

Streams of light perforate the intricate jaali screens, creating a sublime effect of lighting and depth. Along with energy-saving lights, this architectural feature helps keep the building’s carbon footprint low and is one of the reasons the office has a Leed (Leadership in Energy and Environmental Design) platinum rating, the US Green Building Council’s highest sustainability certification.

The term jaali, meaning net, is used in Central and South Asia. Cut from marble or red sandstone in ornamental patterns, jaali was a distinct architectural feature in India between the 16th and 18th Century. The exquisitely carved jaalis of the Taj Mahal, built in the Indian city of Agra in the mid-17th Century, create a rhythmic blend of solids and voids, concave and convex, lines and curves, light and shadows. The Hawa Mahal, or “Wind Palace“, built in 1799 by Rajput rulers in Jaipur, has 953 windows with lattice screens designed to let in a gentle breeze.