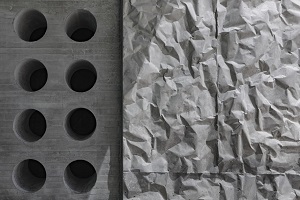 How architects are making concrete walls look like crumpled paper

As blogged on CityLab.com, the Reach, the long-anticipated expansion of D.C.’s John F. Kennedy Center for the Performing Arts, opened to audiences on September 7 with a festival featuring the Kronos Quartet, the Chuck Brown Band, Trombone Shorty, the National Symphony Orchestra, and many more artists. The building, designed to draw in new audiences with more intimate stages, played a key role in all those performances.

One of the design elements that visitors will likely notice right away is the “crinkle concrete” that lines the walls in several performance spaces. It’s a material developed by Steven Holl Architects specifically for the Kennedy Center expansion. For the Reach, the architects looked for ways to use concrete—acoustically and aesthetically—that haven’t been tried before.

Garrick Ambrose, a senior associate at Steven Holl Architects and project architect for the Reach, talked to CityLab about these novel applications of an ancient building material.

Can you explain the basic structure of the Reach?
The floors, the ceiling, the walls, the exterior facades are made out of cast-in-place concrete, which is a liquid material poured into forms that give you the final end product. The material goes from liquid state, hardens, and goes into a solid material state—that’s the actual structure of the building that holds everything up.

Why do some of the rooms at the Reach have different surfaces?
When you have two concrete parallel walls, like we do in our rehearsal spaces [Studios J, F, and K] and then in the Justice Forum [an intimate theater space], parallel walls are really bad for acoustics. You get a condition called flutter echo, where you have two sound waves bouncing off two parallel hard surfaces. So we had to break that sound up. What we needed to do was create a random texture which would diffuse and break up the sound. That’s where we came up with crinkled concrete.