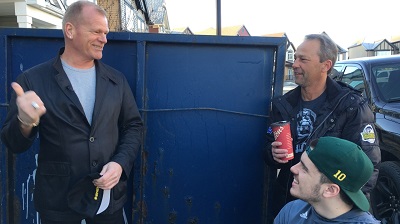 As reported on CTV News, one of Canada’s most recognizable home renovators has acted as a fly on the wall during renovations to the family home of an injured Humboldt Broncos player.

Mike Holmes is known for his TV shows in which he rescues property owners from house makeovers gone wrong.

He has been overseeing remodelling at the home of Ryan Straschnitzki in Airdrie, Alta., just north of Calgary, where Holmes met the family and did a tour of the work on Friday.

“He’s been involved since about two weeks after the accident. He didn’t want any attention,” said the 19-year-old’s father, Tom Straschnitzki.

Ryan Straschnitzki was one of two junior hockey players paralyzed in the crash last April that killed 16 people on the team’s bus. Eleven other players were also injured.

The team had been on the way to a playoff game when a semi truck blew through a stop sign and into the path of the bus at an intersection in rural Saskatchewan. News of the crash made headlines around the world.

“My team was contacted after the tragic accident by a close friend of the Straschnitzki family. We just knew we had to help,” Holmes said in an email in the days before his visit.

“This is not about publicity and media. This is about doing what’s right for the family. We were fortunate that so many trades and product suppliers stepped up and contributed products and their services.”

The renovation is months behind schedule, largely due to a number of structural problems in the original home.

Watch the video and keep reading on CTV News