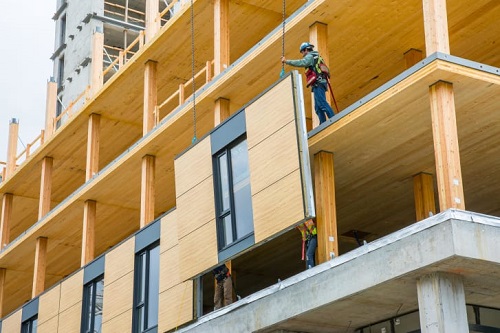 Surrounded by farmland and with a population of under 10,000 people, the Norwegian town of Brumunddal might seem like an unlikely setting for a record-breaking high-rise.

But soaring above the neighboring Mjøsa lake, more than 100 kilometers north of Oslo, the 280-foot-tall Mjøstårnet tower became the world’s tallest timber building when it opened last year.

The 18-story structure contains apartments, office space and the aptly-named Wood Hotel. And beyond putting a small town on the world map, it has added to a growing body of evidence that timber can provide a sustainable alternative to concrete and steel.

“To get attention, you have to build tall,” said Øystein Elgsaas, a partner at the architecture practice behind the record-breaking tower, Voll Arkitekter, in a video call.

“And when you have the world’s tallest building made of timber, everybody says, ‘Wow, what’s going on in Norway?'”

“People are interested, and that is actually the most important part of this building — to showcase that it is possible, and to inspire others to do the same.”

The record-breaking feat was realized thanks to a type of engineered wood called cross-laminated timber, or CLT. Part of a larger group of materials known as mass timber, it is produced by gluing strips of laminated wood together at 90-degree angles to one another, before they’re compressed into huge beams or panels under extreme pressure.

The resulting wooden towers — sometimes dubbed “plyscrapers” — were once the preserve of conceptual designers. But thanks to changes in building regulations and shifting attitudes towards the material, they are quickly becoming a reality.