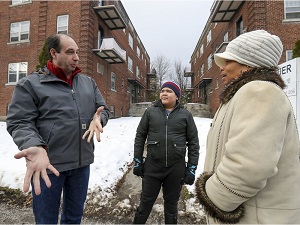 Hampstead referendum on demolition of apartment buildings may set precedent

In the town of Hampstead, the battle over the demolition of two aging apartment buildings is pitting the rights of tenants against those of developers and the municipality seeking to upgrade to something larger, newer and more profitable.

Residents will vote in a referendum Sunday to decide whether the demolition of the three-storey, 76-year-old buildings to allow for construction of a 10-storey structure should be allowed.

The outcome is being closely watched by tenants’ rights activists and developers alike, because it could pave the way for the tearing down of several more buildings on Côte-St-Luc Rd. to make way for apartment complexes 10 to 12 storeys in height, complete with elevators, washer-dryers and higher rents.

“This is the gatekeeper, this one,” says Hampstead councillor Jack Edery, who voted against the demolition. “If this passes, there are going to be others — there are others pending right now that are waiting for this. It’s not even a question of probability. It’s a fact.”

Sharon Hyman has been living in one of the buildings for 26 years. Rents for a 4½ for long-term residents are $750 a month, heat included. There’s no elevator and the windows are old, but the building’s in good shape, according to a recent inspection, and features bright, airy apartments.

“These are mixed-income buildings with people from mixed socio-economic and cultural backgrounds,” Hyman said. “It’s what urban experts say we should be aspiring to for cities — low-rise, low-density communities where people interact and we’re all enriched by the experience. As opposed to when you just displace communities to erect highrises.”

For one of the most affluent municipalities in Canada to justify the demolitions on “the backs of its most vulnerable citizens during one of the worst housing crisis in the city in two decades, in the name of tax revenues, is unconscionable to me,” Hyman said.

Mayor Bill Steinberg says many of the apartment buildings on Côte-St-Luc Rd. are made up of residences between 50 and 75 years old that are falling into disrepair. Owners stymied by rental board laws can’t raise rents enough to cover the cost of upgrades, he said, with the result some are boarded up and vacant.