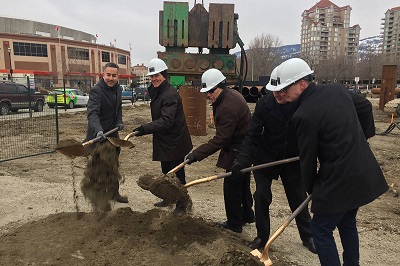 The developers of what are slated to become the two tallest buildings between Calgary and the Lower Mainland, say sales have been so strong for suites in the first tower at One Water Street, they are speeding up their plan to start selling suites in the second tower.

Henry Berznicki, managing partner of North American Development Group, said Tuesday during a ground-breaking ceremony for the 36-storey East Tower on the site at the corner of Water Street and Sunset Drive in downtown Kelowna, 190 suites have been sold. That, he said, is close to a sell out.

“The majority of the East Tower’s one- and two-bedroom homes sold quickly and given the excess demand generated, we are pressed to release more of these homes as planned for the West Tower,” he said. “There’s also impressive demand for sub-penthouses and penthouses in this unique urban-style, luxury high-rise development.”

Berznicki said as a result, the company, which is building the two-tower development in partnership with Kerkhoff Construction, will start marketing suites in the planned 29-storey West Tower immediately, six months earlier then originally planned. Sales of suites in the West Tower will start in the summer.

The development will also feature a three-storey podium structure on top of which will be The Bench, 1.3 acres of open space featuring amenities such as a dog run, two outdoor pools, a hot tub, a pickleball court, barbecue pits and fire pits located in a landscaped setting. It will connect to a large private indoor health club.