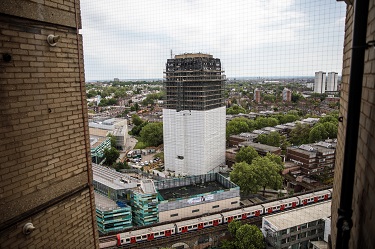 LONDON — Britain’s building safety systems are a lax and confused mess in need of a major overhaul and much tougher enforcement, an investigator commissioned after the Grenfell Tower disaster reported on Thursday, but she did not recommend banning all flammable facades, a critical factor in that fire.

The report drew swift rebukes from survivors of the fire, which killed 71 people, and from Labour members of Parliament, who have demanded a ban on flammable cladding of the sort used on Grenfell Tower, a move the Royal Institute of British Architects has also endorsed. That cladding has long been prohibited in the United States for buildings above a certain height, and in some places it is banned entirely.

Judith Hackitt, the engineer commissioned by the Conservative government to conduct the investigation, acknowledged the need for “a radical rethink of the whole system and how it works.” But she also maintained that her mission was to assess the big picture, not myriad individual rules. As a result, her 159-page report did not address specific changes people have called for, like a cladding ban or requiring sprinklers and multiple fire stairs in high-rise buildings.

“This review is a betrayal and a whitewash,” said David Lammy, a Labour lawmaker who has become an outspoken government critic. “It is unthinkable and unacceptable that so many people can die in a disaster like Grenfell and one year on flammable cladding has not been banned.”

Shahin Sadafi, chairman of Grenfell United, a survivors’ group, told the BBC that he was “disappointed and saddened” but would keep pressing the government for a ban.