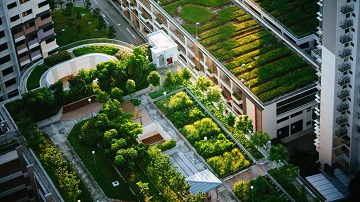 Green roofs can make cities healthier and happier. Why aren’t they everywhere?

As blogged on Fast Company, rooftops covered with grass, vegetable gardens, and lush foliage are now a common sight in many cities around the world. More and more private companies and city authorities are investing in green roofs, drawn to their wide-ranging benefits, which include savings on energy costs, mitigating the risk from floods, creating habitats for urban wildlife, tackling air pollution and urban heat, and even producing food.

A recent report in the U.K. suggested that the green roof market there is expanding at a rate of 17% each year. The world’s largest rooftop farm will open in Paris in 2020, following similar schemes in New York City and Chicago. Stuttgart, in Germany, is thought of as “the green roof capital of Europe,” while Singapore is even installing green roofs on buses.

These increasingly radical urban designs can help cities adapt to the monumental challenges they face, such as access to resources and a lack of green space due to development. But buy-in from city authorities, businesses, and other institutions is crucial to ensuring their success—as is research investigating different options to suit the variety of rooftop spaces found in cities.

The U.K. is relatively new to developing green roofs, and governments and institutions are playing a major role in spreading the practice. London is home to much of the U.K.’s green roof market, mainly due to forward-thinking policies such as the 2008 London Plan, which paved the way to more than double the area of green roofs in the capital. Although London has led the way, there are now “living labs” at the Universities of Sheffield and Salford that are helping to establish the precedent elsewhere. The IGNITION project—led by the Greater Manchester Combined Authority—involves the development of a living lab at the University of Salford, with the aim of uncovering ways to convince developers and investors to adopt green roofs.