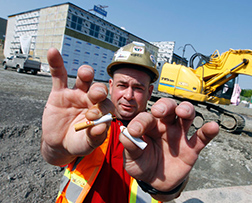 OTTAWA, June 19, 2019 /CNW/ – Tobacco use is the leading preventable cause of disease and premature death in Canada. One Canadian dies from a smoking-related illness every 12 minutes, which represents about 45,000 Canadians per year. The smoking rate among construction workers in Canada is 34%—more than double the national average.

Today, the Honourable Ginette Petitpas Taylor, Minister of Health, announced more than $3.8 million in funding from the Public Health Agency of Canada (PHAC) to support the Canadian Cancer Society’s partnership with EllisDon for the Construction Industry Tobacco Cessation Project. The program will be available to construction workers at select EllisDon worksites in Ontario (Ottawa, Toronto, and Kingston area) and Alberta (Calgary and Edmonton), with the aim of helping workers quit smoking and improve their overall health. The program will scale up to additional select EllisDon sites across the country over the next three years.

The project will offer tailored tobacco cessation support—including an individual quit plan—at select EllisDon construction sites. A 30-day and six-month follow-up plan will help participants have the best chance at quitting smoking. It will be delivered by the Canadian Cancer Society and Ottawa Public Health staff who have training from the Centre for Addiction and Mental Health’s Training Enhancement in Applied Cessation Counselling and Health program. The program, which is being evaluated by the Ontario Tobacco Research Unit, is also sponsored in part by Johnson and Johnson Inc. This project builds on an Ottawa Public Health program that support more than 600 workers in making an attempt to quit smoking at select construction sites in Ottawa between 2014 to 2018.

This investment is part of Canada’s Tobacco Strategy, which was launched in 2018 with the goal of driving down the smoking rate in Canada to less than 5% by 2035.

Quotes“Part of the Government of Canada’s approach to reducing smoking rates is through supporting adults in communities that show higher rates of tobacco use, such as the construction industry. By supporting partnerships like the one between the Canadian Cancer Society and EllisDon, we can help people who use tobacco to stop and discourage others from starting.”The Honourable Ginette Petitpas Taylor Minister of Health

“Smoking tobacco plays a role in more than 40 diseases and other serious health outcomes, including cancer, respiratory problems, and heart disease. Offering tailored support and resources to construction workers at their workplace to encourage and help them to quit smoking will help address the higher than average smoking rates for this group.”Dr. Theresa TamCanada’s Chief Public Health Officer

“We know we can help people live longer and enhance their quality of life by supporting smokers to quit. With tobacco use responsible for 30% of all cancer deaths in Canada and construction workers having much higher than average smoking rates, this significant investment by the Public Health Agency of Canada, in partnership with EllisDon, will enable us to make a real impact in reducing cancer risk among construction workers.” Andrea SealeInterim CEO, Canadian Cancer Society

“Ellis Don’s partnership with the Canadian Cancer Society is a proud example of our corporation’s commitment to the promotion of health and safety both in the places we build and the communities we build in. We look forward to expanding this promising program and hope that its success will lead to it or similar initiatives being adopted by other companies in our sector.” Kenny Tuff, CRSP, GSC HSE Regional Director – Eastern Ontario, EllisDon