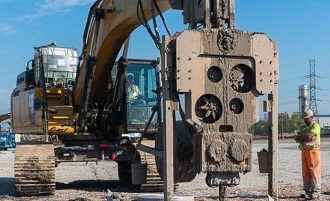 You may not see it, but there is a lot of activity underway at the Canadian port of entry to the Gordie Howe International Bridge project.

So far, Bridging North America has set up its offices at Sandwich Street and Prospect Avenue, 45,000 out of 150,000 wick drains have been installed, the soil is being prepared to support the new border crossing connecting Windsor and Detroit.

On the U.S. side, all but two properties required for the American port of entry are purchased, and the end of the year should see deals for the final pieces of land finalized.

Trucks have begun to arrive at the site bringing in the material to build the bridge. Some 200 trucks will come daily.

However, by mid-2020, progress on the bridge will be apparent to everyone living in the area.

“So right now, we’re focused on the drilled shafts and the work in the ground itself,” said Bridging North America CEO Aaron Epstein. “The towers themselves are going to be rising, I would say in the summer.”

A total of 18 drill shafts are required, 12 for the main tower footing and six for the backspan measuring 36 metres in length each. Work on the tower footings on the Canadian side will start next month, with formwork, rebar, and concrete pouring in January.

That same month, workers will start to install the post-tensioning system, ducts and anchors.

“We’re hoping it’s a good winter, as always, so we can continue to have a good strong productivity throughout the winter,” Epstein told reporters. “We have contingency plans in place as well.”

Over the coming months, drivers will also notice some work on the I-75. The ramps to and from Springwells Street will be reconstructed, along with the north and southbound I-75 service drives at Springwells, Livernois Street, and Clark Street road bridges.

The Windsor Detroit Bridge Authority and Bridging North America have held two vendor summits to find all the workers needed to complete the project.