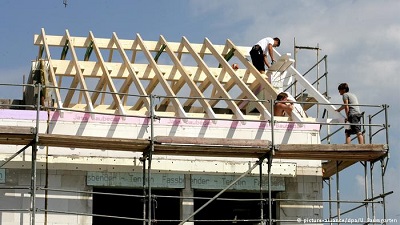 Germany’s building boom slowing down despite a housing shortage

A new economic study says that the rate of construction in Germany is likely to slow down in the near future, despite a continuing housing shortage in major cities and continuing increase in housing prices.

“The building of new apartments is seeing the end of the new building boom,” said the study, published on Wednesday by the German Institute for Economic Research (DIW).

While both private and public investment in construction will only see a “moderate increase” in the coming years, the DIW believes the fact that construction companies are already working at capacity is leading to pressure on pricing – leading to a mismatch.

“Cost increases in wages, energy, raw materials, and land will likely have a big effect,” the study said, meaning that the nominal increases in construction investment – from €373 billion ($445 billion) in 2017 to €392 billion in 2018 – will actually result in a much slower construction of new buildings. Publicly-funded construction will actually decline in real terms this year by 1.6 percent.

Meanwhile property values in Germany’s biggest cities are continuing to swell – in some areas of Berlin rents are rising by as much as 10 percent a year as the city’s population increases by some 40,000 a year. The number of new apartments being built in Germany is rising, from 278,000 in 2016 to an estimated 320,000 in 2018 – though that is not likely to be realized, the DIW said.

Estimates by the German government’s Federal Office for Building and Regional Planning (BBR) have said that Germany actually needs an average of 350,000 new homes a year over the next three years – though other estimates from the construction industry put the scale of demand at closer to 400,000 per year.