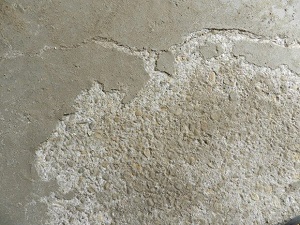 As reported on CBC News, an Edmonton man wants the city to pay for damage he claims calcium chloride caused to the concrete in his garages.

Glenn Krause filed a civil claim in provincial court, arguing the city should pay him $50,000 for the damage to the floors in two heated garages at his home in southeast Edmonton.

Calcium chloride is a de-icing agent the city applied to roads twice last winter, according to a dispute note the city filed in response. None of the claims by either party have been proven in court.

“The bonding agent in the concrete was broken down by the calcium chloride that the City of Edmonton was spreading on the streets of Edmonton,” Krause wrote in his lawsuit filed Aug. 16.

He alleges that city council and administration approved the use of the substance despite “dire warnings” it would cause damage.

In an interview Wednesday, Krause said the damage is “severe” in the area where he parks, and that elsewhere the floor remains in perfect condition.

“The reason I blame it on the calcium chloride is there’s an exact white outline,” he said. “As the snow and ice would melt off of my vehicle in the evening, it would puddle. And you can see exactly where the puddles are, because the calcium chloride is still in the concrete even though I’ve swept and blown out my garage numerous times.”

He alleges that the solution got stronger and stronger each day as water dripped off his car and reactivated residue of the calcium chloride.