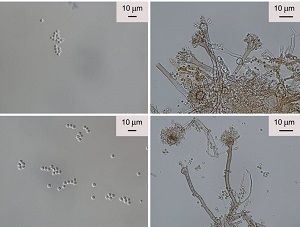 How future buildings may be able to heal themselves using mushrooms

Mushrooms could solve America’s crumbling infrastructure. Yes, mushrooms—or at least a type of fungus scientifically known as Trichoderma reesei. A new technique uses fungi to fill the cracks in concrete—creating a self-healing concrete. The self-healing concrete would be low-cost, pollution-free and sustainable, according to the researchers.

“The idea was originally inspired by the miraculous ability of the human body to heal itself of cuts, bruises and broken bones,” Congrui Jin, mechanical engineering professor at Binghamton University—State University of New York, said in a statement.

The human body repairs its damaged skins and tissues with nutrients—and similarly, Jin and her colleagues have developed a way for concrete to heal itself with some fungi and nutrients to help it grow. The fungi homes in on micro-cracks, which are often the start of much larger structural issues in buildings and bridges.

“If micro-cracks expand and reach the steel reinforcement, not only the concrete will be attacked, but the reinforcement will be corroded,” Jin said. The steel is exposed to outside elements—like oxygen, water, carbon dioxide and chlorides—which causes the reinforcement to rust and break down more quickly. By filling in these micro-cracks, the fungi would ideally be a permanent self-healing solution for the concrete.

The process works by mixing T. reesei into the concrete along with nutrients that help the fungus grow. When structures begin to break down, the micro-cracks leave room for water and oxygen to seep their way into the concrete. The once-sleeping fungal spores can then sprout and grow throughout the cracks, filling the gaps.