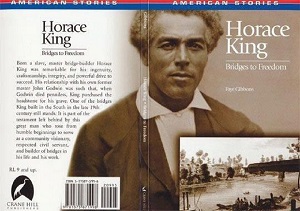 From slave to architect, meet the South Carolina man who built America’s biggest bridges in the 1800s

As blogged on Face2FaceAfrica.com, Horace King had all the odds against him as he was born into slavery on a South Carolina plantation.

He, nevertheless, rose to become a prolific architect and the most respected bridge builder in west Georgia, Alabama, and northeast Mississippi from the 1830s until the 1880s.

King built a number of massive bridges, industrial facilities, courthouses, and other significant buildings across the southern United States.

Though most of his projects have been destroyed, his extraordinary abilities and genius can currently be found in the freestanding, three-story spiral staircase at the state capitol in Montgomery, a structure that is documented as one of the most prized works of architecture in Alabama.

There is also a last remaining covered bridge by King, located in Red Oak, Georgia, which has stood there for decades, having survived the heat and cold and other human conditions.

The bridge’s history is definitely as amazing as the story of its builder, King.

A mixed-race man with Native American, African, and Caucasian ancestry, King was born into slavery in 1807 in an area now known as Chesterfield County, South Carolina. He would receive training in bridge building and design while working for the man who owned him, John Godwin.

Godwin then owned a successful construction business, and even though King was a slave, Godwin allowed him to supervise many of his works, including the management of construction sites that was taking shape at the time due to his exceptional skills.

King and Godwin learned a sophisticated bridge-building technique called the Town Lattice-Truss, and King quickly picked up this design while supervising works by his master.