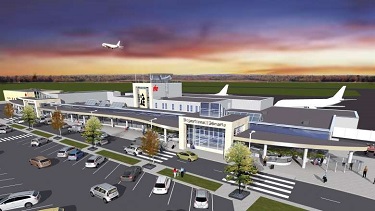 After operating above capacity for almost a decade, the Fredericton International Airport has secured money for a $30-million project expansion.

The project announced Tuesday morning will increase the size of the airport building by half, the airport said.

More ticket counters, a larger kitchen, renovated washrooms, a children’s play area, more seating and more energy-efficient geothermal heating will be among the changes made during the 30-month construction.

Kate O’Rourke, airport spokesperson, said the waiting areas have been too crowded, especially with “sun destination” travellers, in the last few years.

Since the airport has acquired more carriers, temporary counters have been “shoe-horned in,” she said.

But with the expansion, she said, the airport will avoid crowding in ticketing and waiting areas, and the baggage area will be reorganized so travellers won’t have to switch directions to drop their bags then go through security.

The provincial and federal governments are each contributing $9 million, and the Fredericton International Airport Authority Inc. will pay the rest.

The authority said previously that its share of the funding was secured, and it was waiting for federal and provincial commitments.

“This is a project that is well needed and we want to be the ambassador for our capital city and our province,” said Johanne Gallant CEO and president of the airport authority.

“We want to step up our game.”

Construction, which will employ more than 500 people, will begin mid-summer and continue for 30 months.

Gallant said the airport will continue to serve travellers during construction, which is why the project will take so long.

The expansion will give the airport building more natural light and better flow through the ticketing area.

“We’re going to be running as usual with a bit more dust and a little bit more going around corners, so thank you in advance for your patience … short-term pain, long-term gain,” she said.

Speaking at the announcement in the airport’s arrivals terminal were Premier Brian Gallant and MP Matt DeCourcey. The federal money is coming from the New Building Canada Fund