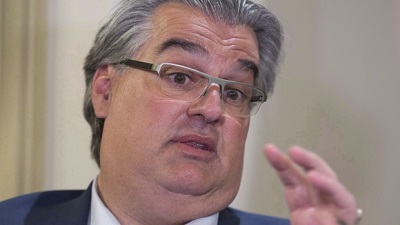 Lino Zambito said he’s stepping back from his work with the unit, known as UPAC, after documents released last week fingered him as a possible suspect in an investigation into leaks to the media.

At a news conference, Zambito emphatically denied being one of those responsible for leaking documents related to a UPAC probe called Machurer, which looked into suspected illegal financing within the provincial Liberal party under former leader Jean Charest.

“Lino Zambito is not the suspect UPAC is looking for,” he said. “I had nothing to do with it.”

Documents unsealed on Thursday reveal that the anti-corruption unit has been hunting for two years to find the sources responsible for the leaks.

UPAC arrested Ouellette last October but released him soon after without laying charges.