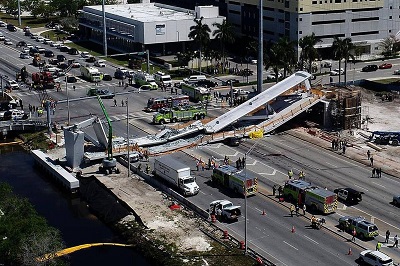 The death toll from the Miami bridge collapse has risen to at least six, officials said early Friday, as engineers and homicide investigators carefully picked through the dangerous scene in search for possible victims and evidence as to what went wrong.

Multiple vehicles were crushed when the bridge came down near Florida International University’s campus at around 1:30 p.m on Thursday. Workers were also on the structure at the time, according to Miami-Dade County Fire Rescue.

Officials said early Friday that personnel had arrived at the site from the FBI, NTSB, and OSHA, the Occupational Safety and Health Administration.

Fire officials have relinquished the lead of the investigation and handed it over to police, Det. Alvaro Zabaleta, a spokesman for the Miami-Dade Police Department, told reporters during a 5 a.m. briefing.

“This has now turned from a rescue to a recovery operation,” he said. “We’ve been working throughout the entire night.”

Homicide detectives were working alongside engineers, both to try to find more victims but also to uncover evidence relevant to the investigation about what happened to the structure.