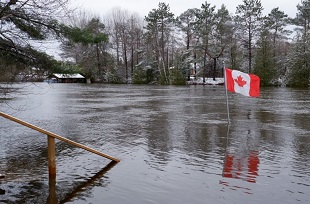 Canada’s national building code has guidelines for how to construct homes to defend against wind, snow, rain and earthquakes — but not floods.

That could soon change.

The National Research Council (NRC) is working on potential changes to the National Building Code of Canada that would include information on how to flood-proof buildings.

“That’s a pretty difficult problem to wrap your arms around,” said Bill Coulbourne, president of Coulbourne Consulting, of Annapolis, Md., the team hired by the NRC to help with the building code update.

Coulbourne and his team are “uniquely qualified to carry our this work due to their extensive experience (140 years combined) in the design of flood resistant buildings,” said an email statement from Nic Defalco, communications adviser with the NRC.

Coulbourne Consulting will be paid $564,057 for its expertise.

In Canada, building construction falls under provincial jurisdiction, but the federal government publishes and updates the National Building Code to provide a baseline starting point.

Six provinces have accepted the national code as is. Alberta and British Columbia use the code, but with some variations. Ontario and Quebec have their own provincial codes.

This year thousands of Canadians were affected by floods.

Residents along the Ottawa River were forced to evacuate their homes when water levels rose to record levels in May. The month before, the Saint John River flooded homes throughout New Brunswick. In July, hay crops in British Columbia were destroyed when the Chilcotin River burst its banks.

The Canadian government says the frequency and severity of flooding will likely increase in the years ahead.