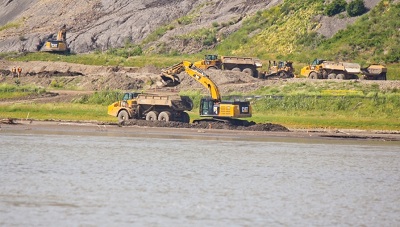 Two Treaty 8 First Nations have launched legal action in an effort to stop construction of the Site C dam.

The West Moberly and Prophet River First Nations filed two separate civil claims in B.C. Supreme Court Jan. 15, naming the province, BC Hydro, and Canada’s attorney general as defendants in a case that will decide whether the controversial $10.7-billion project infringes their treaty rights. As part of the claims, West Moberly and Prophet River are seeking an injunction to halt work and further project approvals by both levels of government.

Both First Nations claim Site C, the third dam being built on the Peace River in British Columbia, violates their constitutionally protected rights under Treaty 8. Site C, along with the cumulative impacts of the Bennett and Peace Canyon dams upstream, would continue to displace First Nations hunters, trappers, and fishers, and interfere with their way of life by destroying habitat home to plants and animals the two nations rely on for spiritual, medicinal, and food purposes, according to the claim.

“The cumulative impact of the Bennett, Peace Canyon, and Site C Dams is to turn the Peace River into a series of reservoirs, destroying the unique cultural and ecological character of the Peace, severing the physical, practical, cultural and spiritual connection the (nations) have with the Peace, and infringing (their) Treaty Rights,” the claims state.

Site C has been under construction since July 2015 after being approved by the BC Liberals.
Keep reading on Alaska Highway News
TweetShareLinkedIn
Submit YOUR Content ❯