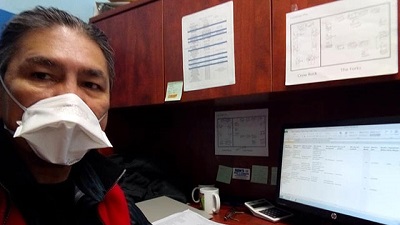 As reported on APTN News, a northern Manitoba First Nation has reopened a school that was closed after fears about toxic, black mould.

The chief and council of Mathias Colomb also terminated the contract of the educational consultant who closed the school, and disbanded the education authority that hired him, APTN News has learned.

“They forced me out,” said Guy Dumas, who shared the notice of Feb. 19 termination he received via email with APTN.

“It’s just because I spoke up, but I have no regrets.”

Dumas, who is a band member but lives off reserve, was a director of education consultant for the Mathias Colomb Education Authority when he shuttered Sakastew School on Dec. 4 after learning about black and green mould in two rooms and maybe more.

He linked the discovery with what he said were high numbers of children missing classes due to health issues.

“They disbanded the Pukatawagan board of education, too,” Dumas said of band leadership.

“Board members are elected by the people (but) they are putting in their own people.”

Band Chief Shirley Bighetty confirmed over the phone the kindergarten to Grade 12 school was reopened Feb. 25.

But she declined to do an interview with APTN, saying she had a meeting.

Dumas questioned whether the school should have re-opened.

He said he has since learned about physical and mental dangers associated with mould and hoped the school’s closure spurred parents to educate themselves about the impact on their children.

“They intend to keep the brown building I was closing down open,” he said of council.

“Mould is mould, they say.”

No one from the band’s administration has spoken publicly since APTN first reported the school was closed.