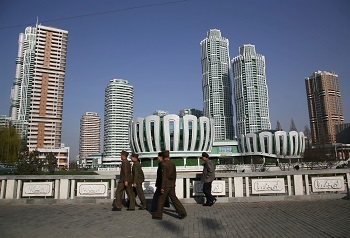 North Korea is racing forward with major development projects some experts believe are aimed at expanding a market for rented or privately owned real estate to help fortify the finances of Kim Jong Un’s regime against the bite of sanctions over its nuclear program.

A swelling market for private property doesn’t sound very socialist, and it’s not.

But the chronically cash-strapped government appears to be nurturing a fresh source of revenue — sales of property to the newly affluent class of North Koreans who have made their fortunes on the country’s growing, but still largely unofficial, market economy that has come into its own since Kim assumed power.

The pressure on Pyongyang is growing as the Chinese investors who traditionally have propped up its economy are retreating amid tougher than ever restrictions imposed by Beijing.

The construction projects, which could cost well over a billion dollars to complete, have a lot of momentum behind them. They are part of a six-year building spree under Kim that has transformed the Pyongyang skyline. North Korean officials told The Associated Press they hope to have at least some of the developments ready to show off for celebrations in September marking the country’s 70th anniversary.

“Since 2012, we have been building a new project each year, so I think one year from now a lot of changes will have been made in the city,” said Kim Kum Chol, an architect with the Paektusan Academy of Architecture, the centre for architectural research and design in North Korea. “We have a lot of construction plans.”

He said there are three main projects this year:

— First, to redevelop the centre of Pyongyang by replacing low-rise housing built after the 1950-53 Korean War with more space-efficient new skyscrapers, offices, public buildings and residential high rises. “For the centre of the city there are many old residences, so we are trying to turn that into new ones,” Kim explained.

— On the east coast’s Wonsan-Kalma area, more than 10 hotels, thousands of units of residential housing and a number of recreational facilities are either planned or underway, Kim said. He said the hotels would range from relatively modest three-star facilities to luxury five-star resorts. Kim Jong Un has already built a new airport to serve the area known as his home away from home.

— The third focus is near the Chinese border in Samjiyon, a scenic town at the foot of Mount Paektu, the spiritual home of the ruling Kim dynasty. The area is to become an “open-air museum for education in revolutionary traditions,” according to state-media reports, and a centre of mechanized potato farming “envied by the people the world over.”

North Korea has often used ostentatious projects to inspire nationalistic pride, reward loyalty and enhance the prestige of the ruling regime. But Kim Jong Un seems to have a penchant for spearheading the completion of high-rise neighbourhoods and modern, seemingly quite functional recreational facilities.