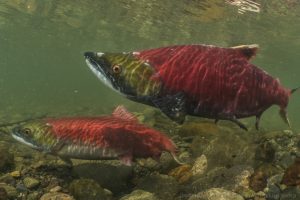 Feds: Big Canada projects will have to do more to protect fish

Proponents of industrial projects situated near or on bodies of water in Canada will in future have to do more to protect fish and their habitat, the Liberal government said on Tuesday.

The announcement by Fisheries Minister Dominic LeBlanc is part of an official drive to revamp the way projects are approved amid increasing public unhappiness about the potential damage from oil pipelines and mines.

“The economy and the environment must go hand in hand … we are beginning to rebuild public trust in how decisions are made about resource development projects,” LeBlanc told a televised news conference in Vancouver on the Pacific Coast.

The measure, outlined in draft legislation, reverses a move by the previous Conservative government in 2012 to pare back protections so only commercially significant stocks of fish were covered. The new law would require all fish and their habitat to be protected.