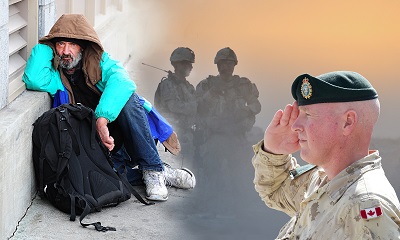 The federal government is considering whether to foot the bill for the construction of affordable housing units as part of a fresh push to help homeless military veterans get off the streets — one of many ideas floated to groups trying to tackle the issue.

Expanding the stock of affordable housing for veterans is referenced in a document — sent to dozens of groups set to gather Thursday in the national capital — that outlines potential steps the federal government can take to reduce the number of homeless vets.

There is no dollar figure included, but the funding would likely come from the government’s $40-billion national housing strategy, which prioritizes projects for veterans and certain other groups, including women fleeing domestic violence, Indigenous Peoples and those with mental health issues.

The government isn’t ready to get into the business of building and managing affordable housing for former soldiers and is instead looking to fund projects from the private sector or other levels of government, said Veterans Affairs Minister Seamus O’Regan.

He said the government is figuring out the most effective way to target veterans through the $40-billion national housing strategy.

The ideas in the working document, which include rewriting departmental rules to provide rent subsidies to veterans, will be part of a day-long event where more than 70 groups will tell O’Regan and other federal officials what does and doesn’t work, and develop some quick policy ideas the Liberals can implement.

“If we can get veterans off the streets now, then we’ll do it now. We’re not waiting on a strategy,” O’Regan said in an interview Wednesday.

Officials have spent two years on a strategy aimed at preventing veterans from ending up on the streets and ending chronic and episodic homelessness among former soldiers. What internal government documents describe is a co-ordinated safety net that helps veterans quickly access housing to ensure their homelessness is brief and doesn’t recur.

The veterans strategy has ping-ponged between the department and the minister’s office for months over requested ministerial changes, according to two sources with knowledge of the issue.

An internal Veterans Affairs Canada presentation, obtained by The Canadian Press under the Access to Information Act, shows officials sought approval in March for the plan, entitled “Coming Home: A Strategy to Prevent and End Veteran Homelessness in Canada.”