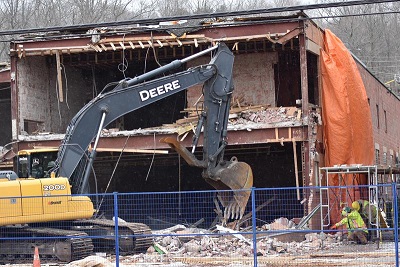 The F.W. Robinson building property is closer to becoming a new vacant lot within the downtown core.

Spectators lined Main Street in Kentville throughout the day Feb. 8 to watch a demolition crew from Mid Valley Construction gradually deconstruct the 1950s-era building commonly known as the former home of the Edge Lounge.

The construction site was a sight to behold as heavy equipment broke through brick walls at the front and sides of the building, and large sections of the roof came crumbling down.

Town council opted to move forward with the demolition of the weather-worn, vacant building after reviewing an engineer’s report examining the condition of the structure.

“The indication from engineers in the report was that the building wasn’t structurally sound and that the cost associated with addressing those concerns was just too great,” said Mark Phillips, CAO for the Town of Kentville.

“There’s no known environmental conditions on the property, other than the asbestos, which was removed prior to demolition,” said Phillips.

“It will be shovel ready if council deems it to be surplus.”

Council is expected to discuss whether or not the property will be deemed surplus – meaning of no use to the town – at the council advisory committee slated for Feb. 12.