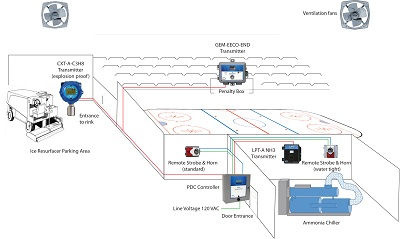 As published in the Toronto Star, some industry experts are asking questions about the staffing and inspections of arenas using ammonia refrigeration systems, months after a leak killed three men at an ice rink in southeastern British Columbia.

Ammonia is inherently dangerous and should be not used in skating and curling rinks, said Lou Roussinos, who spent decades inspecting refrigeration and boiler systems across B.C.

“It’s an absolutely wonderful refrigerant, but it’s dangerous,” Roussinos said. “It’s highly toxic, it will kill you in less than 30 seconds in high concentrations, and we know that.”

The city previously said in a Facebook post that the arena was closed for “emergency maintenance” the morning of the leak. Several agencies continue to investigate, including RCMP and WorkSafeBC.

The case is believed to be the first fatal ammonia leak in Canada, but the gas has seeped out of refrigeration systems before, causing injuries in several cases.

A report from Technical Safety B.C., which oversees the installation and operation of technical systems such as refrigeration and boiler systems, shows there were 40 reported “refrigerated release incidents” involving ammonia across the province between 2007 and 2015.

The report says 10 of the incidents included injuries.