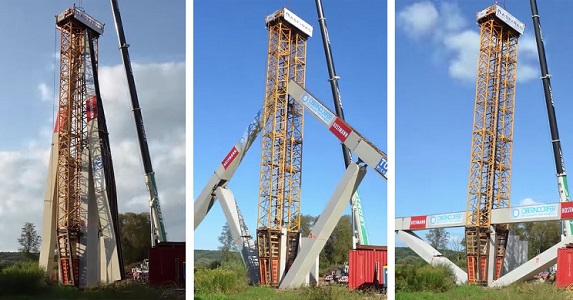 Engineers from the Vienna University of Technology (TU Wien) have developed a futuristic twist on building bridges and demonstrated the technique for the first time in Austria last week. The umbrella-like technique resembles the opening and closing of an umbrella over a river.

The traditional way to construct a bridge happens piece by piece: either the engineers make use of scaffolding or use piers to act as vertical load-bearing structures. In order to keep balance, things progress bit by bit, and the bridge is carefully built outwards in any direction.

According to the researchers, this new bridge construction system is expected to be much simpler, faster, cheaper, and has a less environmental impact.

The team had been working on the new method for years: the idea was patented in 2006, in 2010 first tests were carried out by TU Wien. The technique involved hollow girders being mounted to a pier in an upright position. Girders would be joined at the top, and then, would be gently unfolded downwards.

The researchers implemented the new technique for the first time over the Lafnitz River on the border of Austria and Hungary, where Austria’s new S7 motorway is being constructed.

Keep reading and watch the video on InterestingEngineering.com