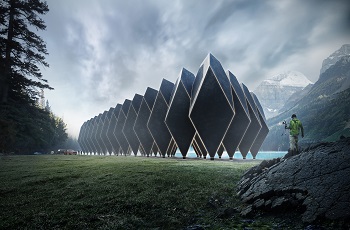 Engineers from WSP are working with architects at Innovation Imperative to create a carbon neutral modular hotel made from groups of concrete pods.

Each of the futuristic faceted pods, which appear to teeter on a tapered point, would be made from reinforced concrete panels.

According to the engineers the panels would be made from local materials and fabricated onsite, allowing the concept to be released in remote and geographically interesting locations.

“Remote construction is one of the key drivers of the design,” Ross Harvey, technical director at WSP told Dezeen.

“The team has worked closely with Lumus Consulting to investigate the use of a mobile field factory, which will give us high quality panel fabrication whilst being onsite, reducing delivery challenges.”

Sites in Cape Verde, Norway, Canada, New Zealand, Spain, Portugal, Andorra, Hungary and the UK are all currently under consideration, with the first locations due to be revealed in the summer of 2018.