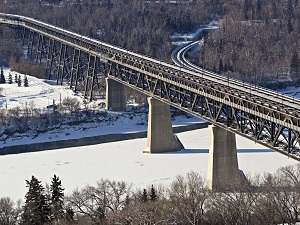 The High Level Bridge is so corroded, some of its steel beams are only half as thick as they once were, according to an engineering study.

The heavy concrete foundations are no longer strong enough to carry the weight of LRT trains and a proposed shared use path, according to the report published by Stantec engineers earlier this month.

The bridge was built for freight trains in 1912. So even at its reduced strength, it’s still safe to drive and walk across. But the cost to restore it to original strength would be monumental, said Jason Meliefste, city branch manager for infrastructure planning and design.

“You’re dealing with a 100-year-old structure,” he said in an interview Wednesday. It has 5,000 steel beams, more than 1,000 different sizes, all held together with steel plates and old rivets. “No bridge lasts forever.”

City officials commissioned the engineering report as part of the Central LRT alignment study, trying to determine whether a route meant to create a loop between Whyte Avenue, the University of Alberta, downtown and Bonnie Doon could piggy back on the aging structure.

Earlier this month, planners instead proposed to build a new, parallel LRT bridge, perhaps at a lower height to preserve sight lines for the heritage High Level Bridge. That’s the only way to ensure a new LRT line would function for 100 years, they said.

The report also said widening the narrow shared-use paths on either side of the bridge is only “marginally feasible,” with a rough cost estimate of $24 million.

The only solution might be creating a park atop the bridge that some Edmonton residents have been dreaming of for decades.