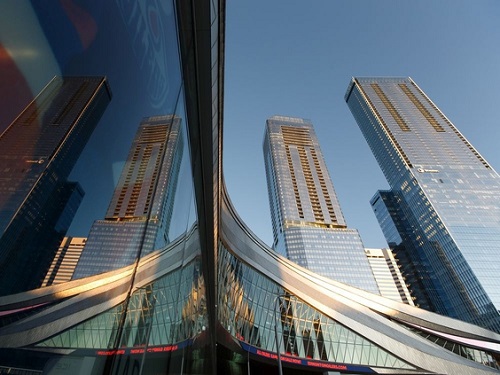 Two skyscrapers at the heart of Edmonton’s Downtown Ice District are being recognized on the world stage, winning an international design award as the best retail and mixed-use development.

The competition recognizes project teams for the best design and construction efforts worldwide across several different categories. Submissions were accepted between January 2019 and April 2020, with a record number of entries despite the COVID-19 pandemic.

Edmonton’s Ice District is a $2.5-billion mixed-use sports and entertainment district centred around Rogers Place, home to the Edmonton Oilers. Ice District spokesman Tim Shipton said these developments surrounding the arena were designed to bring people to the Downtown core for entertainment and this award signifies the hard work has paid off.

“Stantec Tower, JW Marriott Edmonton Ice District and The Legends Private Residences were all designed to draw residents to the vibrant Downtown core of Edmonton,” Shipton said in a news release Tuesday morning. “These towers have transformed the urban fabric in Downtown Edmonton, and we are very proud that their design teams have received well-deserved recognition for their efforts.”

The Ice District development beat out mixed-use developments from several other countries including Australia, Ireland, Sri Lanka and Malaysia.