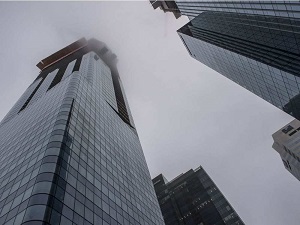 Edmonton Ice District hotel has finally topped out at 56 storeys

The new epicentre of Edmonton’s downtown? It’s located in what used to be a rundown area of cheap buildings and dusty parking lots. The new JW Marriott Edmonton Ice District hotel, Edmonton’s tallest building, has finally topped out at its full height, 56 storeys.

For now, it’s Edmonton’s tallest skyscraper. When it opens early in 2019, it will also be Edmonton’s first four-star hotel.

“There’s no better real estate than that,” says JW Marriott executive Steven Walton, who is in charge of marketing the hotel to guests and conferences.

The hotel will attract both guests looking for a posh experience and also the major conventions that Edmonton has previously been unable to host.

“If you’re a mid-sized association conference that typically does the circuit, they go to … Montreal, Toronto, Vancouver … They would typically skip over Edmonton because we didn’t have the condensed hotel rooms,” Walton says. “Already we’re winning business now from Calgary that we wouldn’t have won before.”

Adds Maggie Davison, vice-president, tourism, at Edmonton Economic Development Corp: “In the convention world, to have a new hotel and one of the JW quality in Canada actually does raise our game.”

JW Marriott doesn’t own the building, but manages the hotel within the tower. The JW brand is Marriott’s top-end hotel, with only 70 hotels worldwide out of the company’s 6,500 hotels meeting that standard, says Walton, who used to work at the Hotel Macdonald.

The hotel takes up 22 floors of the skyscraper, which is owned by Oilers owner Daryl Katz. Condos take up the next 33 floors.