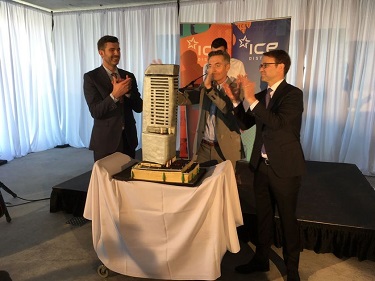 Officials marked another milestone in the long-running revitalization of downtown Edmonton Tuesday when they celebrated topping off what’s now the city’s tallest building.

“Billions of dollars worth of long-term confidence and investment in our city, one of the biggest real estate plays in the country — that’s got a lot of attention,” he said following a ceremony to commemorate the building reaching its approximate maximum height.

The four-star JW Marriott luxury hotel will occupy the first 22 floors of the building at 104 Avenue and 102 Street, providing 346 rooms along with a pool, spa and a nearly 1,850-square-metre fitness centre when it opens next March.

The company only has two other Canadian hotels under this name, and expects the more than 200 annual events across the street at Rogers Place will be a huge draw for customers, Marriott’s Western Canadian vice-president Martin Stitt said.

“This project obviously is iconic and creates a whole new destination. When you look at the JW brand … the approachable luxury, lack of pretence, authentic — all of those we think speak perfectly to Edmonton.”

He’s not concerned about the city’s up-and-down economy, saying Edmonton hotel occupancy rates are rising while the total supply of downtown rooms has remained static.

“We have a solid demand base in downtown Edmonton and it’s growing … We don’t have any worries about the success of this project.”

The 262-unit Legends Private Residences in the tower’s top 32 floors are scheduled to open in the last half of 2019, said Glen Scott, president of Katz Group Real Estate.

This structure and the Stantec Tower next door, which will be Canada’s tallest building west of Toronto when construction tops out this fall, are key parts of the Ice District’s first phase, now about three-quarters finished, Scott said.