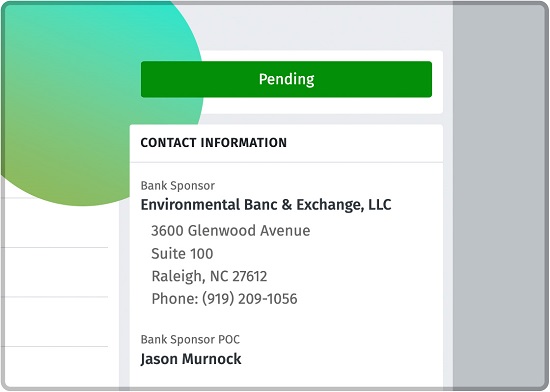 Ecobot customers can now view mitigation banks by list or interactive map, along with their approval status, type, and U.S. Army Corps of Engineers (USACE) district. Ecobot automatically generates a list of banks nearby each project area, as well as a downloadable vegetation species list.

In a review of U.S. Army Corps Data, the National Environmental Banking Association (NEBA) states that the “use of credits from a mitigation bank may cut permitting timelines by as much as 50%.” Ecobot’s new functionality further augments the ability of customers to speed construction starts while building a robust, data-driven picture of the natural environment.

“Mitigation banking is becoming an increasingly large part of the development process,” says Lee Lance, Ecobot co-founder and CEO. “Contextualizing publicly-available mitigation banking data directly into our platform at the project level further improves our customers’ ability to swiftly deliver quality work to their clients. This is just the first of many expansions to come.” According to Ecosystem Marketplace, the compensatory mitigation marketplace is valued at over $100 billion.

“Compensatory mitigation is a first stepping stone to connecting natural and built systems, putting money value to ecosystem services,” says Tara Allden, Senior Practice Builder at Kimley-Horn and Associates, Inc. and Ecobot advisor. “We can’t change what we don’t understand. So long as those systems are kept separate, the opportunity to understand and change won’t be fully available.”

Also included in this update:

The latest version of Ecobot is now available for customers who can sign up for a training session. If you’d like to learn more about this new functionality, schedule a demo of Ecobot.