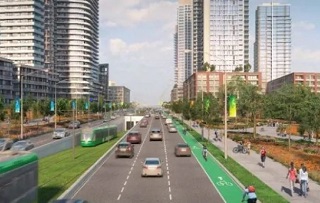 As one of the city’s largest neighbourhoods slowly moves from the drawing board to reality, planners and politicians are struggling to decide which of the old buildings can be cleared to make way for the new.

Don Mills Crossing will transform 50 hectares of land around the intersection of Don Mills Road and Eglinton Avenue East from largely commercial properties to a mix of uses, including homes for 10,000 families, as well as parks, businesses, affordable housing and retail space.

“It’s a massive change,” said Deputy Mayor Denzil Minnan-Wong, whose Don Valley East ward includes the new neighbourhood. “A lot of it has to do with new transit lines being brought in here.”

The heart of the new neighbourhood will be its transit hub: the Eglinton Crosstown LRT will run through the centre of the new development, and the northern terminus of the TTC’s proposed new subway relief line — called the Ontario Line — will be near the Don Mills-Eglinton intersection.

“Over the next 10 years there’ll be some big changes … We’re prospering and because we’re becoming a transit hub with the Don Mills Crossing and the Ontario Line, there’s going to be more development,” Minnan-Wong said.

Before any shovels are in the ground though, the city must decide what to do with the current structures in the area, many of which qualify for protection as heritage sites, city staff and politicians say.

At last week’s meeting of North York community council, staff presented a list of eight properties that they say should be on the city’s heritage register. Another seven, they said,  warrant consideration and further discussion with the buildings’ owners.