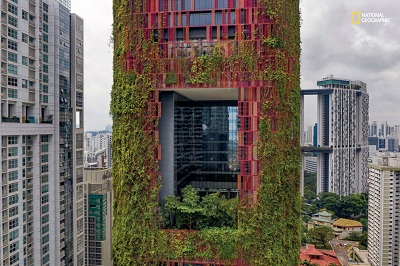 As reported on ABC News, when you think of what cities of the future will look like, what do you imagine?

Perhaps flying cars zipping around skyscrapers thousands of feet tall, or robots delivering packages or cleaning up streets. But each of these innovations focuses on technology, and while new technologies will definitely be part of future cities, they should not be what defines them, experts say.

“When people talk about that topic, they usually talk about technology — ‘The Jetsons,’ flying around in cars, robots and that kind of thing,” said Rob Kunzig, senior environment editor at National Geographic and author of the article appearing in the special issue of the magazine. “What interested me is that we sort of made that mistake before — focusing on technology. The cities we have today, especially in the U.S. but in other countries as well, are really built around cars and that has created lots of problems.”

Cars have allowed us to get around for over a century, but it wasn’t until after World War II that Americans’ use of cars ramped up. As the population and economy grew, more people moved to the suburbs and public transportation systems were closed, according to the Environmental Protection Agency. These rapid changes contributed to urban sprawl, or the expansion of urban areas into nearby undeveloped land with little regard for urban planning, spurring an increased reliance on cars to get around. It’s not only a problem in the U.S., either; it’s worldwide.

Sprawl has been associated with increased energy use and pollution, which has impacted public health and the environment. One-third of deaths from stroke, lung cancer and heart disease are due to air pollution, according to the World Health Organization. Climate change is closely linked to pollution, and efforts to reverse it are ongoing in countries across the globe.

But the problem with sprawl goes further, Kunzig said, “affecting our economy and social justice because people tend to be segregated by class and cut off from opportunities when transportation is inadequate,” he said.

Keep reading and watch the news video on ABC News