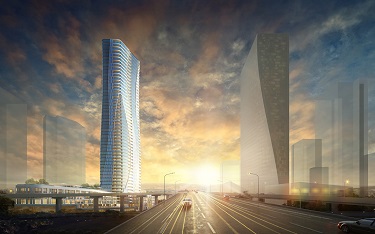 Plans for a striking, slender skyscraper, resembling the dancing motions of a woman, soaring high above a site just east of the north end of the Granville Street Bridge in downtown Vancouver were revealed to the community today.

The developer, Pinnacle International, will seek a rezoning for the large vacant, irregular triangular-shaped lot at 601 Beach Crescent, which is framed by Beach Crescent to the south, Seymour Mews to the east, Pacific Boulevard to the north, and the Granville Bridge’s northbound offramp onto Seymour Street to the west.

If completed, the 52-storey would stand 535 ft in the skyline, making it the tallest tower in the area – taller than even the adjacent Vancouver House by 42 ft.

And it will certainly make quite an impression on not only the immediate area but much of the city centre.

The combined effect of both towers together on the north end of the bridge will create a new visual ‘gateway’ into the city centre while also enhancing the dome-shaped skyline.

In fact, the concept of iconic gateway towers on the north end of the bridge was first identified by the City of Vancouver’s own planning process nearly 20 years ago – under the General Policy For Higher Buildings – and the project team is now executing that vision.

Learn more on this proposed project on Dailyhive.com