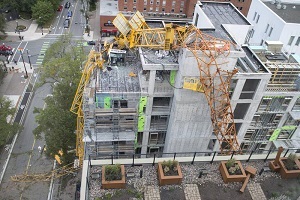 Developer not sure why crane collapsed in Halifax during hurricane Dorian

As reported in The ChronicleHerald, the developer of a new building in Halifax where a large crane toppled during hurricane-force winds on Saturday says the crane was “storm ready,” and he’s not sure what caused it to collapse onto the under-construction building.

But an official with the province’s labour department said Monday it’s too early to determine what action could be taken as a result of the incident.

The image of the towering yellow crane draped over the grey concrete shell of a new residential development on Brenton Place and Brenton Street has become one of the most widely recognized symbols of Dorian’s destruction in the region.

Storm-watchers flocked to the downtown area to see the wreckage firsthand — despite authorities pleading with residents to steer clear of the area.

Wadih Fares, the president of WM Fares Group, said Monday he was shocked to learn about the crane collapsing at the company’s development.

He said the contractor in charge of the development’s form work prepared for the hurricane-force wind, putting the crane in a storm-ready position.

“I’m very puzzled because I know our contractor who owns the crane on the site thoroughly prepared for the weather,” Fares said in an interview. “This was a terrible accident, and we’re just thankful no one got hurt.”

He said he would welcome changes to Nova Scotia’s construction rules to reflect the increasing risk of extreme weather.

“Probably from a code point of view, things could change to meet the challenges of the weather that we’re getting now with the risk of hurricane storms,” Fares said.

A spokeswoman confirmed that the Department of Labour’s Occupational Health and Safety division is conducting an inspection of the incident.