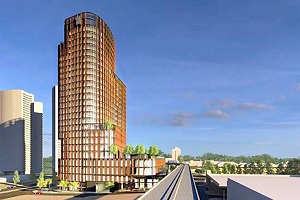 As reported in the Surrey Now-Leader, a developer is hoping to build a new highrise on the former site of the Best Buy in Whalley.

The proposal, according to a planning and development report that will be at council on Monday (Sept. 16), is for a 25-storey office tower on the southeast corner (100th Avenue and King George Boulevard) of the Central City Mall in City Centre.

The proposal, which is still in the planning stages, is asking for council’s approval to amend the road network on the subject site, rezone a portion of it to comprehensive development zone (CD) from community commercial zone (C-8), and a development permit.

Staff is recommending the public hearing be scheduled for Oct. 7.

Each phase will be subject to rezoning and development permit applications.

The report also says the proposal, which is 656 feet from King George SkyTrain Station, “conforms” to the goal of achieving highrise, high-density, mixed-use development around SkyTrain stations.

Keep reading in the Surrey Now-Leader