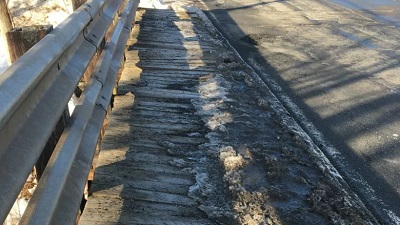 As reported on CBC News, a deputy mayor in Colchester County is worried a deteriorating bridge in Brookfield could be dangerous, but a replacement isn’t scheduled for another five years.

“You can actually see a bow in the beams underneath as you come onto the bridge and you can see the cracks,” Geoff Stewart told CBC’s Information Morning.

The bridge on Highway 289 is the main link between Middle Stewiacke and Upper Stewiacke and is used by buses taking students to and from a nearby high school and elementary school, Stewart said.

“I’ve lived in this community most of my life and this is the worst that I’ve seen the condition of the deck of this bridge,” he said.

He wants a complete renovation of the structure, which was damaged decades ago in a fire, or for it to be replaced altogether.

The province has agreed to do just that — but not until at least 2023.

That’s not soon enough for Stewart.

“I think it’s going to be a lot worse than it is if it’s still there,” he said. “I’m not an engineer but I certainly have seen a lot of changes in that bridge over the last number of years.”

Plus, Stewart said the community has been told before that it was part of the five-year plan, only to have the work put off.

“There’s a lot of concern in the community,” he said. “I’m receiving letters from some of the community groups, individuals are calling in and talking about the condition of the potholes that are on the bridge surface itself.”

Complaints about poor road and bridge conditions are all too common in Nova Scotia, says an MLA in neighbouring Cumberland County.

That’s why Elizabeth Smith-McCrossin is advising people in Stewart’s position to speak up — and loudly.