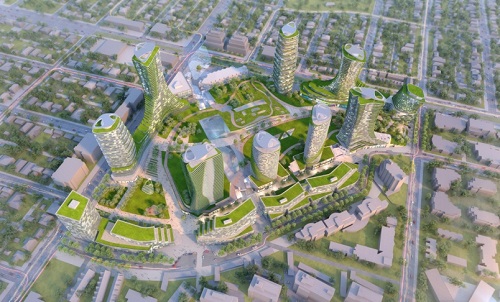 A “drastically improved” park and larger civic centre are among key changes in design plans for the redevelopment of Oakridge Centre, according to architect Gregory Henriquez.

QuadReal and Westbank are developing partners in the massive project, while Henriquez Partners Architects is the design lead.

Rezoning for the 28-acre site was granted in 2014, but the project was delayed and scaled back after a shallow aquifer was discovered below the mall in 2015. Target was also supposed to move into the old Zellers space in the mall, but it shut down its Canadian operations in 2015, and the property officially changed hands from its long-time owner, Ivanhoe Cambridge, to QuadReal Property Group on June 1 of this year.

The latest plans for the park and overall site are being unveiled at open houses Dec. 6 and 9. (Read more about park plans HERE)

Some portions of the nine-acre park will be at grade level, while other parts will be on the roof.

Keep reading in the Vancouver Courier