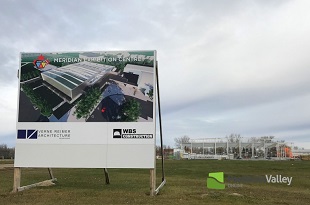 Multiple additions to the Meridian Exhibition Centre plans have pushed the city $1.2 million over the original budget of $18 million.

Director of Planning and Engineering Scott Toews notes the city has included a number of changes in scope throughout the design of the Meridian Exhibition Centre to increase functionality and reduce long-term operation and maintenance expenses.

Changes include improved mechanical and electrical efficiencies to 20 percent above the National Energy Code to qualify for Manitoba Hydro’s new buildings program grant for energy efficiency. He explains the addition is expected to reduce ongoing operational expenses and have a return on investment in 10-15 years.

Finally, the city is considering using heavy-duty turf floor covering for the entire indoor field as opposed to a mix of light-duty and heavy-duty to better accommodate trade shows with heavy equipment or vehicles like RVs.

Mayor Martin Harder says they hope to launch a funding and sponsorship drive to cover the extra costs.

While the early snowstorm in October delayed construction, Harder notes they hope to see the structure’s exterior up before winter sets in.

The 23,000 sq. ft. Meridian Exhibition Centre will add a second arena and indoor turf facility joined to the current Winkler Centennial Arena. The facility will also be able to host gala events for up to 1,200 people.

Click here to see a virtual tour of the facility on PembinaValleyOnline.com