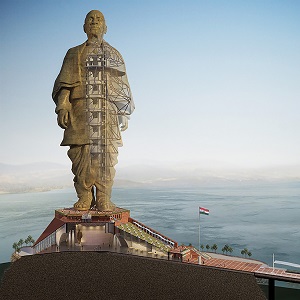 Design and construction of the tallest statue in the world

The Statue of Unity, to be the world’s tallest statue when completed, has made significant headway with its construction. Designed by Michael Graves Architecture & Design, the Statue of Unity will be 182-meters tall and depict Vallabhbhai “Sardar” Patel, the first deputy Prime Minister of India. Standing at almost twice the height of the Statue of Liberty, the Statue of Unity project will also consist of a hotel, memorial garden, visitor’s center and miles of roadways and bridges to connect the statue to the town of Kevadia, India.

The Statue of Unity is currently being built at the Sadhu-Bet Island, approximately 3.5 km south of Sardar Sarovar Dam in the Narmada district of Gujarat. The project is spearheaded by the current Prime Minister of India, Narendra Modi, to promote the significance of Sardar Patel’s achievements in India’s struggle for independence.