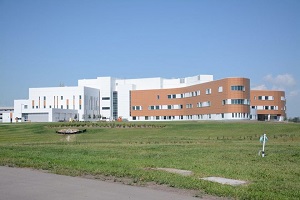 As reported in the Daily Herald Tribune, next Monday will mark the eighth anniversary since then-Premier Ed Stelmach used a backhoe to break ground for the still unfinished Grande Prairie Regional Hospital.

The $763-million facility was originally slated for completion in 2015.

“Had things gone differently, the hospital would be up and running and serving the people of the Peace, which was the point,” said Grande Prairie MLA Tracy Allard. “Our government is committed to ensuring that happens.”

“I realize that people have been waiting far too long and so this is a key priority for our government.”

Alberta Infrastructure Minister Prasad Panda said in a statement that construction was “progressing really well” and crews had about 30 to 40 per cent of the work left to finish. He did not provide an estimated completion date.

In addition, over 400 construction workers are onsite per day with that number expected to rise as more trades are brought on.

“I am confident that Clark Builders (the construction manager) will be able to deliver the hospital on schedule and within budget,” Minister Panda said.

“Our government is committed to delivering key infrastructure projects like the Grande Prairie Regional Hospital that build a prosperous future and get Albertans back to work.”

In June, Minister Panda along with local MLAs Allard and Travis Toews toured the hospital.

“I was actually pleasantly surprised,” Allard said. “I found that there was a lot of people onsite and the second surprise for me was there was an incredibly positive work atmosphere.”

She added that crews had an “aggressive schedule” towards finishing construction but warned that a “ramping-up process” for testing the hospital and training staff would have to follow before the facility could open.

As for why the hospital has experienced delays, Allard said a number of factors played a role.