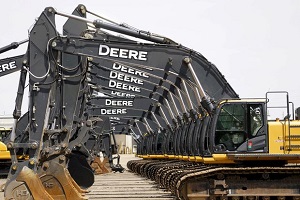 As reported in The Globe and Mail, Deere & Co. on Tuesday announced indefinite layoffs for 163 U.S. manufacturing workers at plants in Illinois and Iowa that make agricultural, forestry and construction equipment, citing decreased customer demand.

The layoffs come week after the company said it would reduce production by 20 per cent at its facilities in Illinois and Iowa in the second of half of the year to keep inventory in line with retail demand.

The world’s largest farm equipment maker is reeling from the fallout of the U.S.-China trade war that has slowed purchases from farmers.

Weaker demand in the latest quarter dented its earnings, forcing Deere to trim its full-year earnings forecast and initiate a review of costs.

In August, the Moline, Illinois-based company said it was assessing its manufacturing footprint as part of the cost structure review.

In an e-mailed response, Deere said 50 production employees at Harvester Works, which makes large agriculture equipment, in East Moline, Illinois, would be put on indefinite layoff. Separately, 113 workers would be laid off for an indefinite period at its construction and forestry plant in Davenport, Iowa.

The year-long tariff war between the United States and China has slashed the export earnings of American farmers. China imported $9.1 billion of U.S. farm produce in 2018, down from $19.5-billion in 2017, according to the American Farm Bureau.