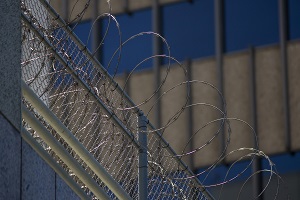 As blogged on ProPublica.org, last June, Fabian Cardoza headed to the shower in the dilapidated Merced County Main Jail. The 20-year-old had spent a month there awaiting trial on a robbery charge. Two cellmates boxed him in. One pinned Cardoza to the floor. The other slipped a braided bedsheet around his neck and tightened it.

It was just past noon, but no correctional officers took notice. No one was monitoring the video camera that watched the area and, because the facility was so outdated, officers would have had to stand directly in front of the cell to see anything inside.

The jail was built in 1968, before most of the prisoners were even born. Inmates live behind rusted bars in the aging cellblocks, where eight people share a space the size of a two-bedroom apartment. The sleeping area has stacked beds bolted to the walls, opening into a dayroom that serves as a bathing and communal eating space. On that Sunday afternoon, it was a killing ground.

County officials knew the jail needed to be scrapped, its conditions branded “deplorable” in a scathing 2008 review. The outside reviewers said it was difficult to find the right parts to repair the decades-old sliding cell doors and other fixtures. Gang members mingled in blind spots where staff members were unable to keep track, and design flaws made segregating inmates exceptionally challenging.

Merced County’s corrections consultants agreed. “The Sheriff’s Department has determined that the antiquated Main Jail needs to be shut down, the infrastructure is post-salvageable, and the dysfunction of the jail layout creates problems in creating a manageable and safe environment for the staff and in-custody,” their written assessment states.

Over the years, Merced County officials hoped to fix the jail’s flaws by tapping into $2.1 billion in state construction money, a critical piece of California’s ambitious criminal justice reforms known as “realignment.” Designed to relieve unconstitutional overcrowding in state prisons, the program, which began in 2011, reclassified hundreds of crimes and diverted thousands of offenders to county jails. Sheriffs and corrections officials accepted the changes, in part, because counties received a cash incentive to rebuild or update local facilities.

Keep reading this blog on ProPublica.org